Many thanks to Kelly Miller, Ph.D., President & CEO of Texas A&M University-Corpus Christi, for her words about working with Registry Member Bill Kibler, Interim Vice President for Engagement and Student Success 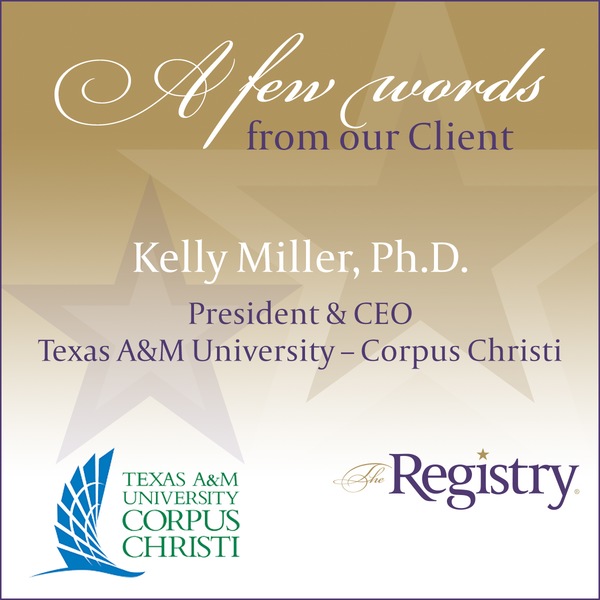 Many thanks to Kelly Miller, Ph.D., President & CEO of Texas A&M University-Corpus Christi, for her words about working with Registry Member Bill Kibler, Interim Vice President for Engagement and Student Success.

“Dr. Bill Kibler’s hiring and transition to campus were seamless. The team had worked together for many years under the leadership of the previous VP, and Dr. Kibler professionally and masterfully integrated into the team to begin his term in the leadership role. Early on, his assessment and attention to various functions within the division led to more streamlined processes and a more efficient working environment. This was specifically demonstrated through his masterful conflict resolution practices on all levels.

He was not only instrumental in his communication and leadership within the division, but he was also well-liked and respected by the students he worked with, as well as outside customers, like parents, he assisted in navigating difficult situations and circumstances. He was a true champion of not only the SEAS Division, but of the university as a whole. Dr. Kibler was well-respected with demonstrated honesty and integrity from the very beginning.

Dr. Kibler was an important contributor in the President’s Cabinet, bringing meaningful insight and perspective to various topics. I appreciated his 'dive in' attitude, which made the transition between the previous VP and his interim tenure not just smooth, but a continued building of momentum towards a new chapter. His time on campus was extremely beneficial for every area he touched. I would highly recommend him for positions in the future; he is an exceptional professional and great asset to any team.”