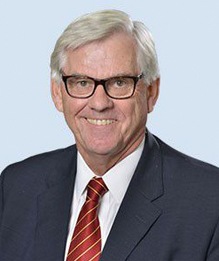 Dr. Newbould has served as president of Mount Allison University in New Brunswick Canada, president of North Carolina Wesleyan College, and president of Richmond, the American International University of London in the U.K.  Previously he was a faculty member, Dean and Vice President (Academic) at the University of Lethbridge in Alberta Canada.  He has taught as well at Hokkaigakuen University in Sapporo Japan, and at Baudartius College in the Netherlands.  He has served on numerous Boards, including the International Association of Universities, based in Paris France.  A Canadian, he served as national Chair of the Association of Universities and Colleges of Canada, and as a member of the Order of Canada selection committee.

Dr. Newbould has had a long association with The Registry, first as a client who appointed several interim senior administrators and later as member and interim provost at the University of Mary Washington in Fredericksburg Virginia, as interim president of St. Mary’s College of Maryland in St. Mary’s City Maryland, and as interim provost of St. John Fisher College in Rochester, NY.  He currently serves as a Registry senior consultant and serves as a Registry principal for interim placements.