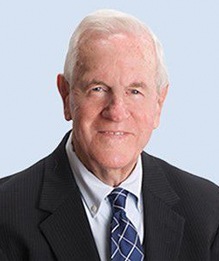 Born, raised, and educated in Boston, Massachusetts, Mr. George Matthews is a graduate of Northeastern University. In 1978, Mr. Matthews was elected to Northeastern University’s Board of Trustees. In 1989, he was elected as the Board’s Chairman; a position that he held for ten years. During his tenure as Chair, he hired two presidents and provided leadership for the transformation of Northeastern from a regional institution to a nationally ranked university (now ranked #40 nationally in the U.S. News & World Report rankings).

Mr. Matthews is Chairman of the Gorbachev Foundation of North America, which he founded with the former President of The Soviet Union, Mikhail S. Gorbachev. He is co-founder and member of the Club of Madrid, a resource center for democracy whose one-hundred-plus members are all former prime ministers or presidents of their respective countries. He is also a Senior Fellow of the Institute of Socio-Economic and Political Studies at Trinity College of Oxford University, U.K.

In 1998, Mr. Matthews was a recipient of the highest honor of the Les Amis D’Escoffier Society of Boston—The Medal of Honor. In addition, the Vatican State has honored Mr. Matthews with a knighthood—Knight Grand Cross of the Equestrian Order of the Knights of the Holy Sepulchre of Jerusalem, founded in 1099.